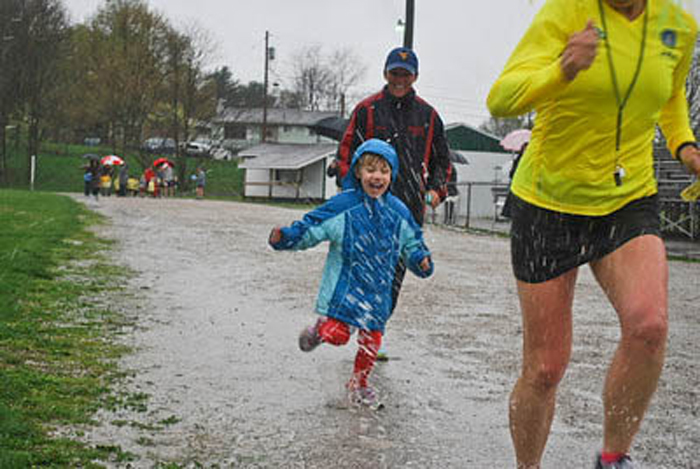 Anytime Parkersburg’s River City Runners have an adult event, there is at least one companion children’s events. They also stage separate children’s events. “We love to see different generations running together,” said board member Sharon Marks.

When Parkersburg’s River City Runners and Walkers holds an adult event, they have a children’s event  too.  There are races for teenagers and events for toddlers. “We do whatever we can to make it fun for them and make them want to come,” said longtime board member Sharon Marks. “It’s non-competitive. It’s about running for fun.”

Every kid who runs gets a prize, she said. “This is about getting them to have fun running with other kids and maybe to improve their own time, but not so much competition,” she said. They don’t drill kids or make them work out.  Sometimes they dress up in costumers. Sometimes they chase the grownups. Sometimes there’s an obstacle course. 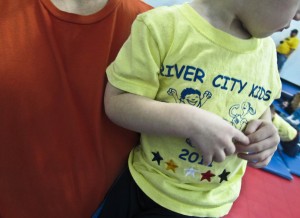 The first time a child participates in a calendar-year run-walk event, they get a T-shirt. After that, they get an iron-on star for each event. Kids with four stars attend a free party at the Y at the end of the year.

At the end of each season, hundreds of kids and their families gather at the Parkersburg YMCA for a party.  Every kid who has five stars is invited to bring his or her whole family to 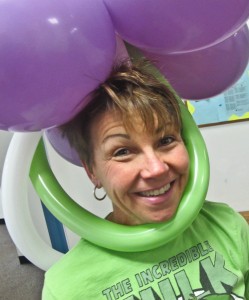 Sharon Marks having fun at the yearend kids’ party

a party, to swim, play basketball, and do whatever the Y offers.  Then they all get awards and eat ice cream and cake.

“A lot of parents have started running because of their kids,” Marks said. “We go out and speak in the schools and send materials home.  The parents see it’s a good deal and they enroll their kids, then they start running too.”

They have also created after-school running clubs in all the high schools. “This is already a running town, and ten years from now, it will be even more so,” Marks said.  “If these kids start loving to run now, chances are, they’ll be in good shape ten years from now.”

In Jefferson County, the adult running community organizes regular childrens’ events such as this obstacle course race.  The proceeds from the huge yearly Freedoms Run pays for fitness trails at the county elementary schools.